I filled the gas tank yesterday and saved enough money to buy three or four heads of cauliflower.

Why cauliflower? Everyone in Canada has been talking about the rocketing price of the crunchy white crucifer and the falling price of gas. The Canadian economy and its currency are closely tied to the price of oil, and our dollar's value has plummeted as a barrel of crude dipped below $30 US.

Currently a Canadian dollar will get you about 68 cents in U.S. money. For Canadians the low dollar has good and bad effects:


We Canadians have a lot in common with Mexico. The United States' southern neighbor is also a heavily oil-dependent economy. In recent years, whenever I am buying pesos, their value appears to follow the same trajectory as Canadian currency, in comparison to U.S. dollars.

Right now, in January 2016, the Canadian dollar is worth more than 13 MXN, the strongest its been in about 4 years. It made daily living, dining out and purchases for our Mérida home seem like a bargain while I was there this month. But anything I needed to pay for in USD - well, that was a shock.

I suspect most Canadians aren't aware of the advantage of the Mexican peso right now. Actually, many Mexicans might not realize it either. I needed an urgent dental procedure for a broken tooth while in Mérida. The dentist's office kindly filled out the form for my insurance claim (I am lucky to have dental coverage at work). They carefully converted the peso price of my new crown into what they calculated as the Canadian-dollar value of the procedure: $505.

After I picked up the form, I puzzled over how they came to that figure. I was charged a little over 3,600 pesos for the treatment. Finally I realized that they assumed the Canadian dollar was at par with the U.S. In reality, my credit card bill shows that after currency conversion and Visa card fees, I was charged just $291 Canadian in total for my newly refurbished molar.

Really makes me feel like chomping down on some $6 cauliflower. Crudites, anyone?

I was doing some cleaning, on my last night of our recent stay in Mérida, and there it was: clinging to the wall just inside the patio door.

I had never seen anything like it. It looked kind of scary. Maybe three inches across, if you count the long legs and thingies at the back end. I took a picture for later identification, and then, sorry to say, I killed it. I didn't think it was a good idea to leave it there for someone else to deal with, in case it was a nasty one.

Then I forgot all about it until this morning, when I was sorting through photos. It brought back for a moment that feeling of alarm I had when I first saw the creature. It's a feeling I experience less and less often as the strange and unusual things about Mérida gradually become familiar.

I did a bit of poking around online and found this reference to a Tailless Mexican Whip Scorpion, or just  the Tailless Whip Scorpion. My little visitor looks like it could be an immature specimen - the other ones I found look less translucent, with more serious-looking pincers.

A Mexican rite of passage: my first scorpion, maybe. I've heard from friends and acquaintances that you can expect to encounter them in your home or wherever you hang out. I've seen at least one study that says the Yucatán's scorpions are relatively wimpy. Their sting, the study concluded, is painful but not very serious. But I didn't know there were any that didn't have stingers, or venom, and could be coddled like a rather creepy pet.

I am feeling a bit guilty for crushing the little guy.


Been back a little over a week now. Out of the habit of blogging after so long away, but still feel the urge to share sights and sounds and experiences. On this trip I am finally getting around to seeing and doing things that I've been planning for years, in some cases.

One of those things is walking dogs at the Evolución shelter in the Pueblo of San Lorenzo. Man, there are a lot of dogs there. It's a bit overwhelming at first, but they seem to get along.

People bring their unwanted dogs to the gate of the shelter. Others are found abandoned, like the box of puppies a friend and her daughter found on the corner near the shelter. We walked four of those ones. I also walked a huge friendly doberman that was so excited to get exercise that he nearly yanked my arms off for the first half of the outing.

The other two that I walked were very cute, medium-sized shorthairs. They were afraid to be leashed and taken out of the small run they shared with their litter mates. They cowered on the road when I first set them down outside the front gate, and could not be coaxed or dragged to walk along.

So I had to carry each one until we were well outside the town, on a quiet road where no traffic or other noise could scare them. Quite quickly they turned giddy, zig-zagging and dancing to the end of their tether, twisting around our legs, nipping and jumping on their siblings.

By the time we got them back to the shelter they were relaxed starting to get the hang of walking on a leash. Back inside the compound the whiskery female stayed close by, lying at our feet. She even stretched and rolled over for a belly rub - a real display of trust.

I felt we'd accomplished something, maybe even helped make these gentle animals more easily adoptable to a permanent home. It was also nice to have a bit of dog time, as I miss our terrible twosome back home in Victoria.

They welcome volunteer walkers at Evolución on Wednesday and Saturday mornings. If you decide to go, plan to spend a couple of hours.
Posted by Debbie at 2:37 PM 3 comments:

The long way back to Mérida 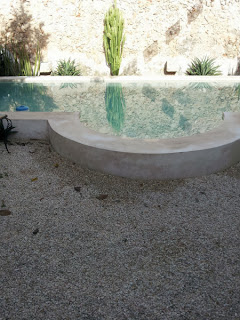 Our neighbour Juan de Dios greeted me with surprise on the street yesterday. We have been away from Merida for a year and a half. "We thought you weren't coming back," he said. 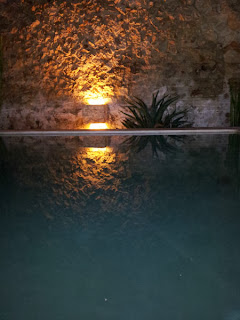 For a while it was hard to know how to get back to Mérida. How does anyone get anywhere with all the deadlines and challenges of jobs and kids? (Not to forget the neurotic, biting pets that can't really be left with anyone else.)

Anyway, things got done, or didn't, at least not yet, and we did come back. Well me, and soon, Tom too. Things change when you're gone awhile. People, businesses, landmarks come and go. Plants that I can't identify have established themselves around the patio. A pool! Love the pool! Didn't realize it was so captivating just to watch the ever-changing reflections; the splash of rain on its surface. I finally understand the purpose of flip-flops.

Maybe things haven't changed all that much,though. Maybe it's the long absence that's woken up the senses to the extraordinariness of ordinary things like the scent of jasmine flowers spilling onto the street on my bike ride earlier today.

Hello Mérida. It's good to see you again. 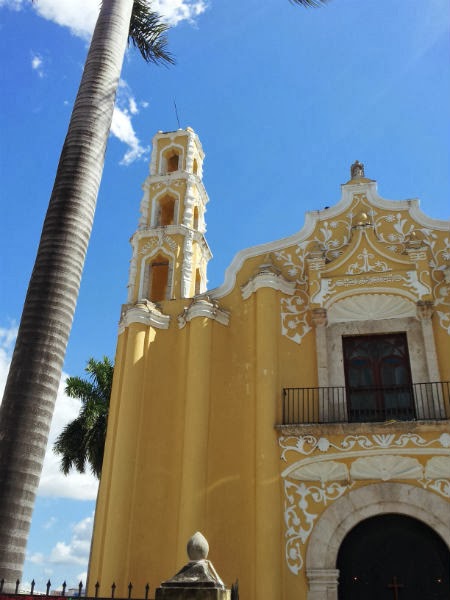 Losing it in Mexico and other stories of medical tourism

Like they say in the film, there are eight million stories in the naked city.

There are at least as many stories about medical tourism - that thing where people leave their (usually developed) country to get medical treatment in another (frequently developing) country at their own expense.

I've been trying to tell a few of those stories over the past year and a bit. It's an effort to reflect what researchers are discovering about the largely unmonitored international trade in health services in all of its complexity.

The latest stories are now on the CBC website: 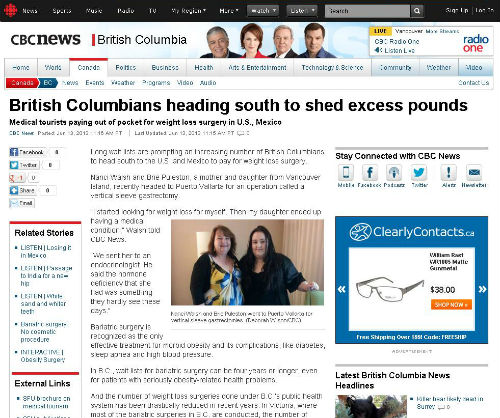 Posted by Debbie at 1:12 PM No comments:

Disney has backed off its bid to trademark the name "Día de los Muertos" and has dropped plans to make a Pixar film by the same name, according to the OC Weekly.

Possibly some people will be disappointed that they will not be able to find Día de los Muertos-trademarked Disney products including: 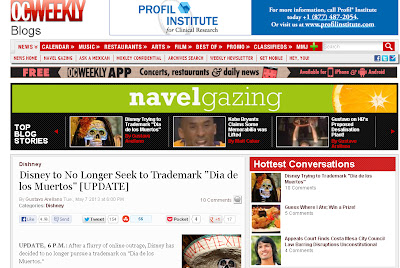 Had a week of vacation time to burn off before the end of March, and we entertained the thought we might actually get away to Mérida for a break.  Instead, it has turned out to be a working vacation. We're packing up and emptying our overstuffed house for the renovation that's actually going to start next week.

There have been so many delays and false starts that I thought this project would never happen, so I'm excited but still not quite believing it. (If you're interested I posted a bit more about it on my renovation blog.)

Still, we have decamped for a few months to a rented 60s split level. It's close to Fallingdowne and just a block from the beach. It's like a consolation prize - not Mérida or a Gulf Coast village, but it feels like a vacation.

The most important thing, perhaps, is the dogs like it. 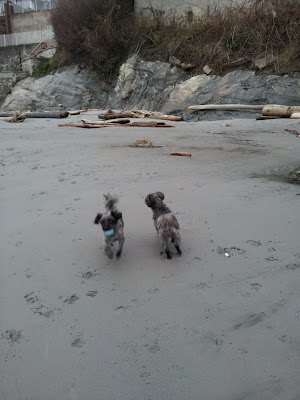 Debbie
Victoria, B.C., Canada
I've been told I'm "project-oriented." My current project is acquiring and transforming an old colonial home into a tropical retreat for ourselves, friends and others in Merida, Mexico, a music-filled city surrounded by beaches and ancient Mayan sites.